DODO is a decentralized exchange platform which adopts the Proactive Market Maker (PMM) algorithm and has launched on Ethereum and Binance Smart Chain (BSC). The protocol aims to mitigate the problems of slippage, impermanent loss, and capital efficiency under the Automatic Market Maker (AMM) mechanism by using oracle to feed price data and thus proactively adjusting the price bonding curve. In addition, it has developed several functions listed below to optimize user experience.

② Crowdpooling: combination of crowdfunding and liquidity pooling, which bootstraps the liquidity of a pool by raising funds from the crowdfunding process;

④Mining: users can get DODO rewards through liquidity mining, trading mining and combiner harvest mining (for projects that collaborate with DODO).

DODO launched the DODO Classic Pool with the PMM algorithm in summer 2020 and initiated the SmartTrade in Q4. In February 2021, It announced the launch on BSC with features including SmartTrade, Crowdpooling, public and private pools, and liquidity mining. Also, the V2 version of DODO has been launched in February to advance the growth of long tail market. However, In a recent exploit, DODO has been drained $3.8 million of dollars, and $3.6 million of which was recovered.

For the rest of 2021, DODO will keep releasing the new versions which are:

• V2.1 that focuses on the development of token utility and governance by adding DODO DAO, Member system, and Incentive system;

• V2.5 that focuses on the improvements of trading experience by allowing gas-less limit order;

• V3 that focuses on t nch of derivatives market.

The DODO team currently has 23 people in total, including 3 core management people and co-founders, 10 people in the development team and 10 members in the operations & support team.

Its core management team is from China. DODO was also the first DeFi community in China. 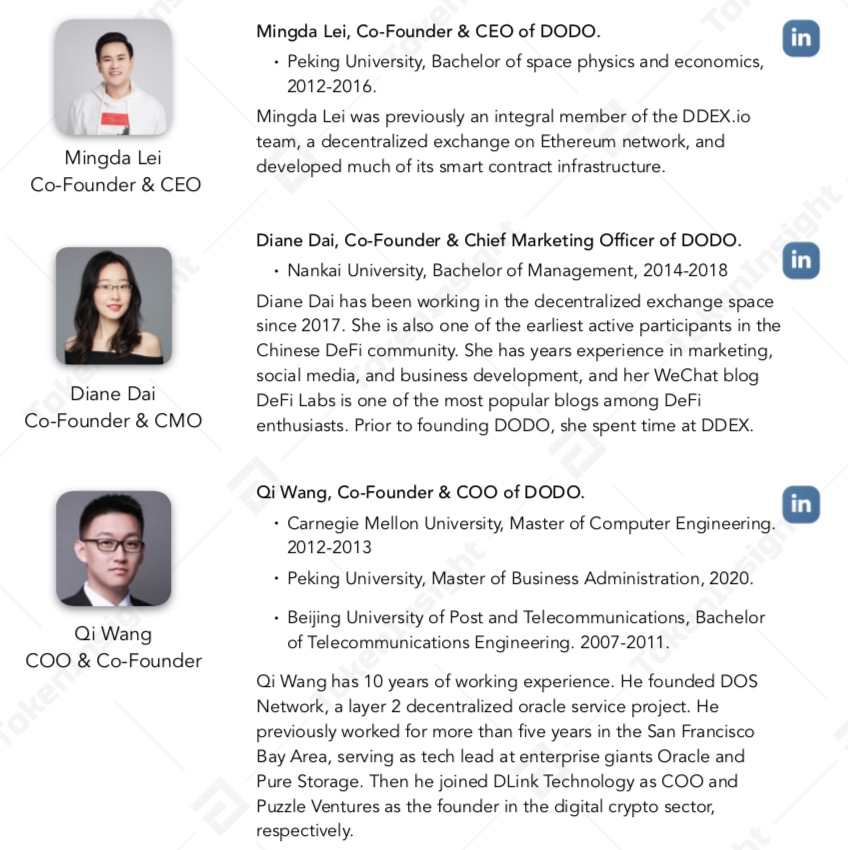 The core application of DODO is to allow assets swap on Ethereum and BSC. In details, the public pools allow users to create liquidity market with customized assets ratios and support high-volume markets, while the private pools were designed to avoid downside risks and discover price for professional market makers. The Crowdpooling can be used by new projects to crowdfund and bootstrap liquidity, and the SmartTrade can be used by traders to seek the best prices from other liquidity sources.

Besides, DODO has developed partnership with Chainlink, Wootrade, and Frontier.

$DODO is the platform's native governance token and has the following uses:

① Governance: holders can govern the platform by creating proposals and voting on proposals (1 $DODO=1 vote);

④Staking: Besides $DODO, DODO also launched vDODO as a proof of membership. Users can get vDODO by staking $DODO (100 $DODO=1 vDODO), and vDODO holders get proportions of trading fees and rewards in $DODO.

The total supply of $DODO token is 1 Billion, 15% of which was allocated to the core team/ future hires/advisors, 16% was given to the investors, 8% was given to the operations/marketing/ partnerships, 60% will be distributed to DODO supporters in the form of community incentives, and the rest 1% was distributed in IDO.

The vesting progress is shown in the chart above. What worth to note is, the community incentive part of the $DODO is divided into liquidity mining, trading rewards and airdrops and the incentives allocation is distributed in a series of programs known as “DODO Carnival”. It has ended the first episode called Grey Parrot and it is on-going the second called Pica Pica. Since the programs do not disclose the detailed info of the amounts and vesting before its ending, the figure provided above is for a reference.